Women In Leadership: Peter Credlin Behind The Image And Brand

Previous Next
Women In Leadership: Peter Credlin Behind The Image And Brand

“For years I let a man take my seat at the table until I found my power.”

Women’s leadership development today is about having the courage to stand up and stand out amongst a predominantly male dominated landscape.

Today, more than ever before, there has never been a better time for us as women to shine as more empowered female leaders and to build our image and brands.

No one understands this better than Peter Credlin, who as Prime Minister Tony Abbott’s chief of staff from 2013 to 2015, knows what it’s like to navigate the male dominated power hungry culture of Australian politics as a top female executive.

Today, Credlin has transitioned to a leading Australian political commentator and presenter for Sky News.

But according to Credlin, it hasn’t always been an easy road to success.

Peta Credlin, by her admission, is just a country girl at heart and like so many other top female executives has had to overcome her own set of insecurities, vulnerabilities and stereotypes throughout her career. 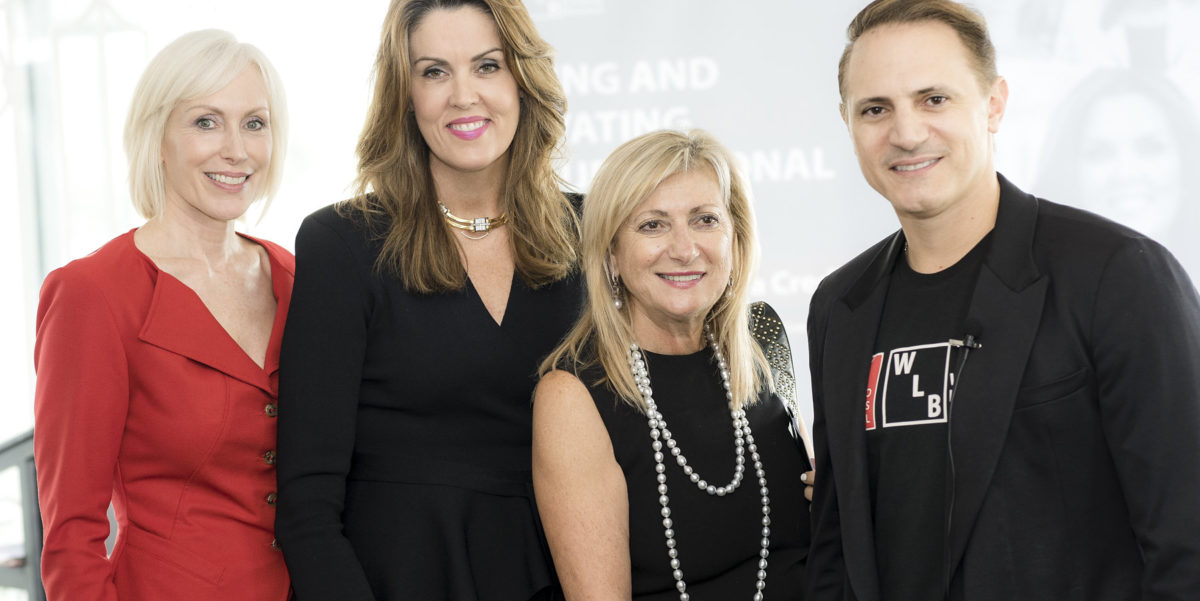 From humble beginnings, Credlin has gone from a shy country girl to one of Australia’s top female executives, with a powerful brand, image and voice in global conversions.

On first meeting Peta Credlin at a Leading Women’s Business Networking Event held by renowned Aussie entrepreneur Sarina Russo, I was instantly struck by her authentic beauty, image and presence.

Impeccably dressed and strikingly tall, I was drawn to her warm, welcoming and genuine energy. The type of woman you gravitate to in a crowded room.

I assume she is confident, empowered and able to stand her ground under any circumstances.

An accurate assumption for the most part, but not quite the whole story.

According to Credlin she hasn’t always felt like the political powerhouse we perceive her to be.

Underneath her public persona lies her real secret to her success and building a powerful personal brand and image.

I had the privilege of meeting and listening to Peta Credlin’s keynote on women in leadership, working as a top female executive in a man’s world and how she has built a world-class image and brand.

1. Don’t Give Up Your Seat At The Table For Any Man!

“For years I let a man take my seat at the table until I found my power”.

Being the only woman in the boardroom (or one of the few) can be intimidating and can often leave you feeling invisible or unempowered.  Especially when stereotypes like “women “take care,” men “take charge” stick!

So, as Peta Credlin explains it – it was easier (at the time) to give her seat away and take another chair at the table than to cause a fuss with a male subordinate.

Firstly, the obvious question is how can such a successful and accomplished female executive ever feel she was ‘invisible’ when she walked into a boardroom?

But, this is a mindset that so many female leaders today resonate with. We fear being seen as over emotional, sensitive or annoying!  Research shows “the belief that women are more emotional than men is one of the strongest gender stereotypes held in Western cultures.”

The revelation took courage to admit and exposed there is one thing you can be sure of about Peta Credlin, she is authentic!

It’s clear she has found strength and power post politics  with no hesitation baring all to empower other women in leadership to understand the complexities of navigating their own pathway to success in what is still predominantly a man’s world.

2.  Don’t Let Other People Brand You

“As a woman, my personal brand and reputation was perceived by others as being tough, uncompromising and fearsome”.

She attributes this to her ability to “run the government as efficiently and effectively as she could!”

The opinion that women are ‘bossy’ and men are ‘decisive’ is nothing new to female leaders and there is no doubt that if she were wearing a pair of ‘pants’ in the party room, she would have been perceived as powerful, strong and unwavering.

Credlin reflects back on her upbringing explaining how her country girl values and beliefs helped her to cope with the public scrutiny and inhouse stereotypes, preferring to stay out of the limelight and remain in the trenches where she feels she has the most to contribute.

People are looking for connections. Today more than ever before people, businesses and organisations are looking for people who influence, make an impact and can lead with confidence.

But for Peta Credlin even in this new digital age, where your personal brand, executive presence, leadership and influence is measured by your on-line footprint, Credlin chooses to be fiercely private, refusing to have a personal or professional profile on any social media platform other than LinkedIn.

Her exposure outside her public profile as a political commentator and presenter on Sky News, is all she’s willing to share, preferring to stay out of the limelight and remain in the trenches where she feels she has the most to contribute and can get the work done without the distraction of the virtual world of likes, shares and followers.

In fact, her defiant resistance to developing a considered personal brand online may be exactly what sets her apart from the crowd!

She is indeed a rare commodity in a world that is now deeply connected by the web and is demanding a new kind of female leadership.

Not a member? Join for FREE>>  to get access to my complete knowledge bank of videos, resources, tips and tools to build your personal brand online.

Download Free Resource
Close Sliding Bar Area
NEW YEAR. NEW YOU!
Find Out What Your Personal Brand Says About You.

This FREE 4 minute quiz highlights the weaknesses in the image you project to others… and reveals what you can do about it.
Measure your brand against the essential components of a powerful personal brand.

Powered by Convert Plus